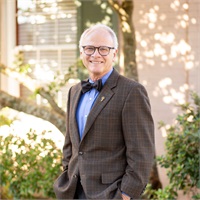 Mike became a financial advisor in 2008 after a successful and varied 33-year career in oil exploration and information technology research and development. As a Certified Financial Planner™, Mike is happiest when he’s spending time with people who want to work toward making the most of their money through financial planning strategies, investments, insurance, and the efficient use of cash flow to address financial goals.

Mike and his wife Mary tied the knot in 1973. They are the parents of three successful kids – Heather (Robby), Betsy (Johnny), and Michael (Lacey) – and the proud grandparents of Rex, Grace, Allison, Maxwell, Posey Jane, and Hudson.

Mike and Mary moved to Slidell in 1976 when it was still a quiet Southern town, and watched it grow into the vibrant city it now is. Early on, Mike took an active role in community service.  He has been a Commissioner for St. Tammany Fire Protection District #1 since 2004, and is a 2005 graduate of Leadership Slidell. He is the Past President of the Rotary Club of Slidell Northshore, where he was selected as Rotarian of the Year in 2002 and again in 2015. He currently serves as Secretary of his club. Mike also serves on the board of Northshore Disaster Recovery, Inc., a faith-based organization that provides home repair services to low-income residents of greater Slidell.

Mike has been an active member of Aldersgate United Methodist Church since 1976, and has taught children’s and adult Sunday school classes for too many years to count. Currently, his class is made up of people of a certain age who are very close to figuring everything out.

A Word from Mike:

“The biggest hurdle many investors face is how to control their emotions. My motivation every day – and where I think I do a very good job – is to be an objective observer for my clients and help them focus on their goals, rather than on the day-to-day gyrations of the financial markets. I try to keep my clients from making mistakes with their money in reaction to news that, in most cases, has nothing to do with their personal situations. There are many factors in the financial world that we cannot control. I help my clients focus on the things they can control, such as rate of savings, risk management, and spending.”